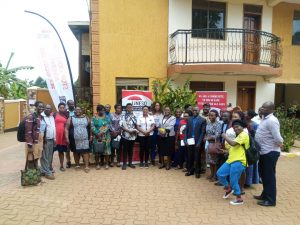 Building and strengthening partnerships and collaboration can go a long way in creating a better working environment for the most marginalized communities, including the sex worker community.

On 24/5/2022, UNESO held a regional stakeholders’ dialogue meeting in the western/ Rwenzori region. The topic for discussion was “forging ways to enhance the promotion of health and Human rights for sex workers in the region“.

Key issues that were discussed included:

Key areas of improvement that called for joint action were as follows:

Meeting Key action point:
Kabarole DLG is to organize a massive world AIDs day, this year 2022, with a campaign to reduce HIV prevalence in the district, so as to promote advocacy for HIV prevention among sex workers, (UNESO and Kabarole Women’s Health Initiative( KWISH) are given an opportunity to participate as chief organizers of the event, granted by the City Health Officer(CHO) – Dr Asiimwe Solomon.