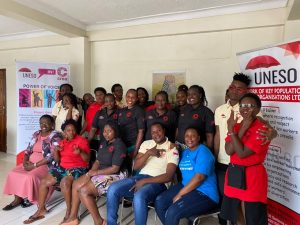 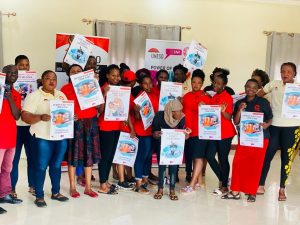 On 29th and 30th August 2022, UNESO under Count Me In 2.0 project coordinated by CREA, conducted two separate GBV responders trainings in Southern and Western regions for sex worker leaders, training them as GBV responders. The trainings aimed to build the capacity of female and LBTQ sex worker advocates and sex worker leaders to prevent and respond to GBV. With specific objectives of:
1. Describe the relationship between issues of gender and power and gender-based violence, and define gender-based violence
2. Identify types of GBV occurring in the setting, causes, and perpetuating factors.
3. Describe the recommended principles for prevention and response to GBV.
4. Identify strengths, gaps, and needs in the setting for prevention and response to GBV.
5. Develop a plan for the next steps to build prevention and response to GBV for follow-up and continuing action after the workshop.
The trainings helped to enhance sex workers’ interest in accurately reporting human rights violations issues specifically GBV faced by female and LBTQ sex workers and built their capacity on how to prevent, respond and document GBV cases among sex workers.

“We have handled quite a number of GBV cases against female sex workers but we have not been documenting and following up and now I realize that documenting and reporting gives evidence for better understanding,” said a sex worker leader.

I will pass on this information to colleagues to improve prevention of GBV against sex workers” pledged a sex leader.

“Following up on GBV cases is really hard and expensive because most people in power want a certain amount before working on a case. This has led to the death of sex workers that are affected and most of them have fled from the areas where they were abused for their safety which makes follow-up really hard”.
In the Southern region, a committee for GBV responders was established to enhance GBV prevention and response in the region. While an advocacy agenda spearheaded by sex worker-led organizations in the South Western region to advocate for the establishment of a rehabilitation center for GBV survivors and victims in the region was initiated. In the western region, the sex workers agreed to do resource mobilization as a collective so that they can acquire funds to sensitize sex workers, community leaders, and police on GBV so that this can help prevent and follow up on survivors of GBV.
Previous ArticleBreakfast meeting with Parliamentarians
Next Article LBQ and Urban Refugee sex workers